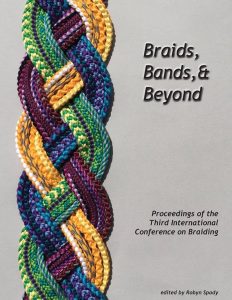 The International Braid Society’s conference, Braids 2016, was held in Tacoma from July 24-July 29th. It was truly an international gathering, with 181 registrants from 14 countries. The conference hosted 30 teachers from around the world, who gave an impressive 36 classes over four days. The entire AKS board was there, as were a number of our members. In preparation for this article, I asked some of the attendees and instructors for their impressions of the conference.

The conference was held at the University of Puget Sound, in Tacoma, Washington. This venue is about 30 minutes south of Seattle. The campus is pleasant and not too spread out, so getting to the classes was generally a short walk from anywhere. All of the classes were held in campus classrooms or conference areas. Most of the attendees stayed in the university’s dorms, which fostered quite a bit of interaction and sharing. Meals were provided in the university cafeteria, which also became a gathering place for everyone.  John Mullarkey, one of the instructors, commented “… what I found unique about the conference was the truly international flavor of it.  From the participants to the different cultural skills being taught, it was one of the most unique conferences I have been to.”

The International Braid Society (www.braidsociety.com) was founded in 1993. While their name indicates “braids” their focus is on the broader category of “narrow-wares,” which includes Kumihimo, Andean braiding, ply-split braiding, inkle and tablet weaving,  cord making, loop braiding and other finger-manipulated work, lucet braiding, and sprang. The conference included classes in all of these disciplines, as well as bobbin and torchon lace, Sanada-himo (a Japanese style weaving), bow-loom weaving, knots, and macramé. Some of the best practitioners of these textile arts were present as students and as teachers; the aggregation of knowledge was both inspirational and overwhelming.

The conference was spread out over five days, with classes being held on the first and last two days, leaving an “exploration day” in between. The organizers put together trips to two Seattle museums and exhibitions for the attendees, with a lunch at a Native American cultural center in between. My highlight of that day was the Asian Art Museum, an Art Deco building from the 1930’s.

On each class day, we started with a presentation from one of the instructors. Monday morning featured Carol James, an expert on sprang, talking about her reconstruction of George Washington’s Sash. On Tuesday, Tadashi Uozumi gave a talk on Kumihimo using composite materials. We think of braiding as being a jewelry-related practice, but it is widely used in industry for everything ranging from bridges to car parts and beyond. Thursday’s presenter was Rodrick Owen, who spoke of his amazing journey as a braider and of his fascination with Andean Braids. Friday’s meeting featured Kim Davis, who did a presentation on bobbin lace.

Evenings were also full – the conference offered a vendor fair for two nights, with an amazing variety of fiber-related products that (unfortunately) led to new potential addictions for me. On the other two evenings, we had presentations on braids present in the Royal Danish Collection by Katia Johansen, and a presentation on Swedish hair braiding by Anna Sparr.

The conference ended with a banquet celebrating a week of braiding, culminating in the announcement of the next braiding conference – Japan, 2019! So start saving!

My next article will talk about the classes I took, plus we will have some postings from other members and their impressions of the event. Stay tuned!