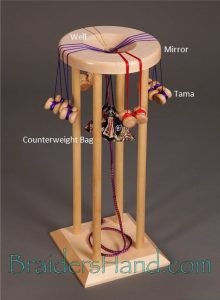 The Marudai is a round-top braiding stand used to make a wide variety of kumihimo braids in many different forms: round, square, rectangular, flat, triangular, and other polygonal shapes. It is considered the most versatile of the 5 basic types of kumihimo braiding stands, or dai. The word marudai comes from Japanese words maru 丸 meaning “round,” and dai  台 or “stand.” The image on the left shows a western-style marudai on the left and a Japanese-style marudai on the right.

Due to the lack of written or physical evidence, it is not known when the marudai first appeared in Japan. It is believed to be an invention of the early Edo period (1603-1868), as evidenced by its appearance in paintings and woodblock prints of the era. Round-top braiding stands are not unique to Japan; they exist in other Asian cultures as well as in Scandinavia and Europe.

The traditional, or Japanese-style, marudai is 40cm – 50cm (16″-20″) tall. It is designed to be used in a kneeling position on tatami mats; it may also be placed on a stand or table top. The Western-style marudai is adapted to be used while sitting in a chair. It is typically about 65cm or 26” tall. A 30” tall marudai is sometimes used for beaded braiding.

The key parts of a marudai is the braiding surface, consisting of three components:

The mission of the American Kumihimo Society is to deepen the appreciation of the art of braiding, providing educational resources, support and connections for the braiding community worldwide.