Rosalie Neilson has been making kumihimo braids for more than 35 years. In 1980, she visited a Tokyo kimono factory, became enamored with kumi braids, took a private class, and came home with a marudai, kakudai, and two instruction books written in Japanese. Throughout the years she has developed into a true master of the art with exquisite designs using both color and geometry.

“My love of color comes from being raised in Oregon. During the majority of the year, nature appears in shades of green, blue, and grey. In this softly lit environment of neutrals, bright colors stand out in sharp contrast.” And so they do in her braids.

Her love of color doesn’t stop there. She was intrigued by the number of ways a 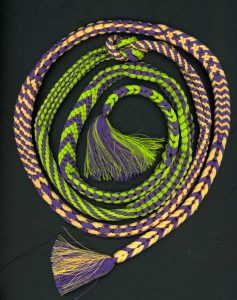 braider could use two colors with the Hira Kara Gumi braid and began exploring each one. In 1998, after 18 years of exploration with this braid structure, Rosalie, with the help of her mathematically inclined brother, documented and published the Thirty-Seven Interlacements of Hira Kara Gumi. This was followed by the Twenty-Four Interlacements of Edo-Yatsu Gumu. A third book Kongo Gumi – A Cacophony of Spots – Coisl – Zags – Lines was published in 2013 and documents all 1,157 variations of the 16-strand Edo-Yatsu using just two colors. These are true labors of passion and kumihimo love!